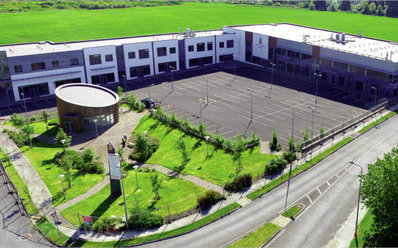 Ross Abbey, the Ferrybank shopping centre complex valued at €20 million upon its completion just over a decade ago, is to finally open its doors within the next six to seven weeks.

One of the more sizeable properties acquired at the first Allsop Auction, the centre has been acquired by two Irish-American brothers, with this exclusive news the culmination of 18 months of endeavour of behalf of Garreth McCarthy and his Manor Properties colleagues.

“We’re delighted to get this over the line,” said Mr McCarthy. “Mr Price will be the anchor store at Ross Abbey and have taken out a 21-year lease on the centre, which is a great vote of confidence in the premises and the wider Ferrybank community. This is a good news story for the area and it’s great to see that after all this time, sustainable employment is going to be created here.”

Mr Price has already pledged to immediately create 20 full-time positions upon opening of the 15,000-square feet facility, and will also be undertaking a new fit-out of its Kingsmeadow centre within the next two to three weeks.

Said Garreth McCarthy: “There are 26 other units within this complex, offering a mix of retail, food, gym and office space. Ideally, we’d love to see a pharmacy and a dentist’s surgery moving in there in time, so as to help bed down the complex within its immediate environs.”

Manor Properties are excellent at what they do, friendly, professional, knowledgeable and real problem solvers.

Manor Properties are excellent at what they do, friendly, professional, knowledgeable and real problem solvers.
https://manorproperties.ie/testimonials/john-doe/